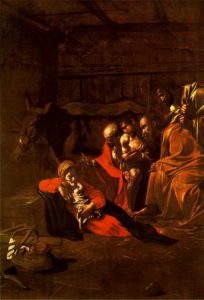 As a matter of fact, it was usually those artists who read the Scriptures with the greatest devotion and attention who tried to build up in their minds an entirely fresh picture of the incidents of the sacred story. They tried to forget all the paintings they had seen, and to imagine what it must have been like when the Christ Child lay in the manger and the shepherds came to adore Him, or when a fisherman began to preach the gospel. It has happened time and again that such efforts of a great artist to read the old text with entirely fresh eyes have shocked and outraged thoughtless people. A typical ‘scandal’ of this kind flared up round Caravaggio, a very bold and revolutionary Italian artist, who worked round about 1600. He was given the task of painting a picture of St Matthew for the altar of a church in Rome. The saint was t0 be represented writing the gospel, and to show that the gospels were the word of God, an angel was to be represented inspiring his writings. Caravaggio, who was a very imaginative and uncompromising young artist, thought hard about what it must have been like when an elderly, poor, working man, a simple publican, suddenly had to sit down to write a book. And so he painted a picture of St Matthew with a bald head and bare, dusty feet, awkwardly gripping the huge volume, anxiously wrinkling his brow under the unaccustomed strain of writing. By his side he painted a youthful angel, who seems just to have arrived from on high, and who gently guides the labourer’s hand as a teacher may do to a child. When Caravaggio delivered this picture to the church where it was to be placed on the altar, people were scandalized at what they took to be lack of respect for the saint. The painting was not accepted, and Caravaggio had to try again.

[S]eventeenth-century painting is not just a continuation of the Mannerist style. At least people at the time did not feel it to be so. They felt that art had got into a rather dangerous rut, and must be got out of it. People liked talking about art in those days. In Rome, in particular, there were cultured gentlemen who enjoyed discussions on the various ‘movements’ among the artists of their time, who liked to compare them with older masters, and to take sides in their quarrels and intrigues. Such discussions were in themselves something rather new in the world of art. They had begun in the sixteenth century with such questions as whether painting was better than sculpture, or whether design was more important than colour or vice versa (the Florentines backing design, the Venetians colour). Now their topic was different: they talked about two artists who had come to Rome from northern Italy and whose methods seemed to them utterly opposed. One was Annibale Carracci (1560-1609) from Bologna, the other Michelangelo da Caravaggio (1573-1610) from a little place near Milan. Both these artists seemed tired of Mannerism. But the ways in which they overcame its sophistications were very different.

Whatever we may feel about Carracci’s methods [the battle-cry of his party among the cliques of Rome was the cultivation of classical beauty], Caravaggio and his partisans certainly did not think highly of them. The two painters, it is true, were on the best of terms- which was no easy matter in the case of Caravaggio, for he was of a wild and irascible temper, quick to take offence, and even to run a dagger through a man. But his work was on different lines from Carracci’s. To be afraid of ugliness seemed to Caravaggio a contemptible weakness. What he wanted was truth. Truth as he saw it. He had no liking for classical models, nor any respect for ‘ideal beauty’. He wanted to do away with convention and to think about art afresh. Some people thought he was mainly out to shock the public; that he had no respect for any kind of beauty or tradition. He was one of the first painters at whom these accusations were levelled and the first whose outlook was summed up by his critics in a slogan he was condemned as a ‘naturalist’. In point of fact, Caravaggio was far too great and serious an artist to fritter away his time in trying to cause a sensation. While the critics argued, he was busy at work. And his work has lost nothing of its boldness in the three centuries and more since he did it.