When u u were psychotic

No you mean to say I

I saw a golden dove descending from the ceiling, a peace dove coming down

where is the I?

Malleability: to be hammered or pressed permanently out of shape without breaking from late Middle English ‘able to be hammered’: from Latin malleus ‘a hammer’.

All these strangers
Bang bang Maxwell silver hammer came down upon her head
Clang! Clang! Maxwell’s silver hammer Made sure that she was dead
Ham

It’s not a hammer

But you said hammer

Fia Backström
The Last of US — that safe spot in the dot above the I in the word life
This work was presented as part of the exhibition:

Clinical postcard, excerpted from:
“Compulsive foreign language syndrome: A clinical observation not a mystery”
Nicoletta Beschin, Angela de Bruin and Sergio Della Sala
Published in Cortex 81 (2016), a journal devoted to the Study of the Nervous System and Behavior.

“An Italian 50 year old right-handed man, JC, with 17 years of education affected by the consequences (obstruction hydro- cephalus, surgically treated with a shunt, and brain stem vascular encephalopathy) of mega dolicho basilar artery anomaly, abruptly started to speak French even though his knowledge of the language was only cursory.

He had superficially learned French at school, used it in his 20’s due to a fling with a French girl but he has not spoken it for about 30 years. In his professional life he used English as his second language. Before brain damage he never manifested a particular attachment to French culture or French cuisine. His accent is not due to dysarthria and he speaks polished and correct Italian, his mother tongue. However, he now states that French is his preferred language refusing to speak in Italian spontaneously.” 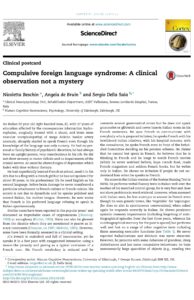 “JC’s French is maladroit and full of inaccuracies, yet he speaks it in a fast pace with exaggerated intonation using a movie-like prosody and posing as a typical caricature of a French man. His French vocabulary is reduced and he commits several grammatical errors but he does not speak grammelot or gibberish and never inserts Italian terms in his French sentences. He uses French to communicate with everybody who is prepared to listen; he speaks French with his bewildered Italian relatives, with his hospital inmates, with the consultants; he spoke French even in front of the befuddled Committee deciding on his pension scheme. He claims that he cannot but speak in French, he believes that he is thinking in French and he longs to watch French movies (which he never watched before), buys French food, reads French magazines and seldom French books, but he writes only in Italian. He shows no irritation if people do not understand him when he speaks in French.” 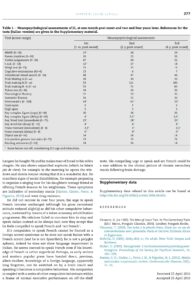 “[H]e presents with some delusions of grandeur, sleep disturbances and has some compulsive behaviours: he buys unnecessarily large quantities of objects (e.g., needing two hangers he bought 70) and he makes tons of bread to his wife’s chagrin. He also shows unjustified euphoria (which he labels joie de vivre): for example in the morning he opens the windows and shouts bonjour stating that it is a wonderful day. He manifests signs of social disinhibition, for example proposing to organise a singing tour for his daughter’s teenage friend or offering French lessons to his neighbours. These symptoms are indicative of secondary mania (Santos, Caeiro, Ferro, & Figueira, 2011) and were drug-resistant.”