Excerpt from “The Jar” in Cuentos de Cuentas:

“My father had bought a few cars and needed money. He unscrewed the bidet and moved it to the side. He broke the cement and took away the dirt. He snapped the seal, put his hand inside and pulled it back immediately. Inside the jar, the money had become a paste, as if it had returned to a previous state. From dust to dust, only more humid.

One by one–or rather: fraction by fraction–he separated the bills. As if he were peeling a very fine and brittle onion layer by layer. In the center he found a ball that had already become a solid object, like the stone of an avocado that also holds its secrets. He stuck the bills he could save, in pieces, to the tiles. They stayed there the whole next day and maybe even one more. My father remembers ironing them; I don’t think that would have been necessary. He called his friend Jorge, the one who was almost like a brother, who then came from Buenos Aires to travel with him to New York.

They opened a bank account in the Banco de Galicia, where he could deposit the most passable half of the dollars, those that were, as Nacha Guevara sings in Vuelvo, “rotos pero enteros” [“broken but in one piece”]. The rest they brought by train to Washington D.C. to exchange in the US Mint.

In the first office, they were referred to another one. […] Pretty much the same questions: how many bills, why did they hide them pretending to bring movies. Why did they not declare them? It was 30,050 US dollars, they hid them because in their countries it was forbidden to have foreign currency, and, yes, they had in fact declared them by ticking the box next to “more than ten thousand.” No-one had asked them how much more, which was later confirmed by a customs agent. He left and came back. He rocked back and forth in the chair. He looked askance, a half smile. Do you want to hire a lawyer?

He left and came back. Serious-looking. They are all false. He rocked in the chair. That’s not possible, with all due respect. They were acquired in different years, from different sources, they can’t all be false. He left and came back. As he sat down, he straightened his suit. Serious-looking. Half are false. He looked them in the eyes. That’s still not possible, as I told you, they arrived in my hands in different moments, in different places. Moreover, we know dollars, we have made a little machine–see how interesting–that reacts to the magnetic ink and warns you when a dollar isn’t real. He made himself comfortable in the chair, stretching backwards. Call us tomorrow and we’ll give you more news. We suggest you don’t leave Washington. He recommended a hotel.”

Excerpt from “The Tent” in Cuentos de Cuentas:

Guillermo placed an announcement in a weekly paper called Segunda Mano, which, if I am not mistaken, used to be published on Mondays (or Tuesdays). […] A man, who, at that time, I would have described as big, came to see it. He had one hand in plaster and a briefcase in the other. A hard-shell attaché with a code, like the ones used by businessmen and spies back then. He also brought a nephew with him. He liked the tent (it’s possible that we saw it open after all). He gave her a closed envelope. I followed the conversation from a distance—interested but wanting to pass unnoticed.

I remember seeing my mother taking the bills out of the envelope and counting them at the kitchen table. Her expression was that of someone wanting to appear as having done this before, as if this time wasn’t more than once more. […] Tsssfts tssscfst trssstsffs trssstvtcs, and, finally, the sound of the agreed sum. Then the money disappeared back in the envelope. “Very well, thank you, I will show you to the door.” The man took the briefcase from the kitchen table with his healthy hand. The nephew took the tent.

I think I also followed them to the door. And when we came back my mother opened the envelope, held the wad and noticed that it wasn’t the same anymore. The man who then seemed big had taken the bills that had been caressed by my mother’s fingers and named by the wind coming from her lips. As in a magic trick, a sleight of hand, he had transformed those notes into others, into a stack with only one real bill: the one on the outside. The filling was made of white papers, carefully cut into the size of banknotes. They were folded with less precision than when separated by color, and embraced by an identical rubber band—a cake made of nothing but flour. 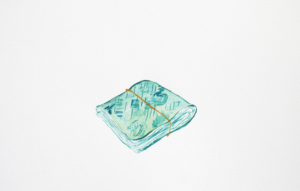 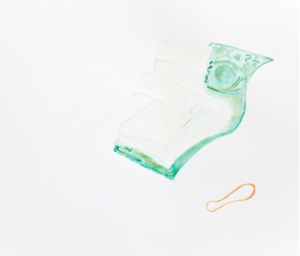 My mother ran to the door, unlocked it, opened it, and looked at both sides of the street. They were no- where to be found. Gone. Gone the man who probably wasn’t that big after all; gone the briefcase that may have had a false bottom; gone the arm that may have been healthy and strong; gone the young man who instead of a nephew may have been an associate (or a lover). Gone the tent, which may not have had the colors of the French flag. Gone the money with its volume and smell.”

Excerpt from “True or False” in Cuentos de Cuentas:

What was inside the boxes were these little black machines: personal, portable, and newly fabricated. Each came in a leather case designed to be easy to access, they could be quickly opened and closed with velcro, and worn on one’s belt. The machine set comfortably in an adult hand and could be turned on and off with a simple movement of the thumb. When running over bank bills with the ideal pressure and speed, they would react to the minus- cule metal particles present in the ink used to print dollars, and reveal, by means of a robotic little light, if this paper treasure was true or false. 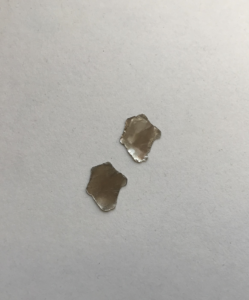