He was carrying a load of notebooks
and other personal items. He pushed them
into my hands, saying, I think
you could use these. I walked on

carrying them and stepped into a pub
where I could sit down and read them.
I was well aware that what had just
happened was extraordinary since

I knew in the dream that he had died.
I was amazed I had been chosen
to receive these things since although
I had met René I did not “know” him.

asked about that. They didn’t show suspicion
but wonderment. The next thing I knew
I was at my friend Scott’s house
in Islington, still with René’s stuff,

telling Scott what had just happened
but he didn’t know who René was
and I had to explain it to him. On
walking, I began to wonder

whether René had ever actually
lived in London. Somehow I doubt it.

Sage Robert advises that my dream
could mislead – “if it implies that René
was a great poet, which he was not,
imo. He had rare talents

but they lay elsewhere.” To live
in strangers’ dreams is a talent indeed.
But is the René Ricard of my dream
René Ricard in person? Nothing

in dreams i entirely what we imagine.
This René Ricard of London looked
nothing like the one who walked
Manhattan’s streets. He more resembled

Gary Indiana. The High Priestess
of the Temple of Oshun says
mind my homework. But my René or Gary
gives permission to slough it off on you.

yes, these are my own outages
collected workarounds
or an aliquot part

no, I didn’t write them
just a minute of deep breathing to reduce stress
brought them briefly into view

so diaphanous and disagreeable
how can you just forget
this shiver in which time contracts? 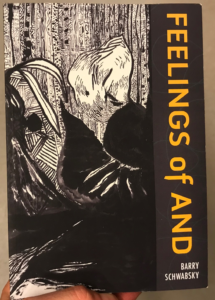 The Heroin mixed w/ the
Free-Base and apparently I am
Having Blackouts. I say
Apparently since I’ve no
Recollection of — Sacking my
Already “who did it and ran”
Apartment.                 The neighbors
Complaining about the loud fights
In my place. I was alone!
I’d surely like to remember if
Someone were there w/ me — Even
A fight to quench this Sahara of
Loneliness I’ve placed myself
Within.
Do I have a secret
Life where I am even engaging in
Domestic quarrels? Wouldn’t that
Be civilized! From me though it
Is probably one of a multitude of personalities
Showing off for the others.