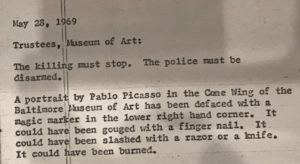 The killing must stop. The police must be disarmed.

The damage is slight. We respect art more than the police respect people. It can be restored, unlike a corpse, but not forgotten. We will not let you forget.

Many of you, Trustees, are influential in the affairs of this city. We advise you to use your influence to put an end to police violence.

FROM NOW ON, EACH TIME A POLICE OFFICER (BLACK OR WHITE) KILLS A CITIZEN (BLACK OR WHITE) IN THIS CITY AND GOES FREE WITHOUT A PUBLIC TRIAL FOR MURDER, WE WILL MAKE EVERY EFFORT TO DESTROY A WORK OF ART IN YOUR MUSEUM.

A single human life is worth more than all the art of the ages.

“On March 10th, 1914, at 11 am, Mary Richardson entered the National Gallery in London and stood in front of the painting by Velázquez known as Venus at the mirror, maybe not for the first time. She looked at it for a few minutes before letting the cleaver she had hidden up her sleeve slide into her hand. She then slashed the canvas several times. The first blow broke the protection glass and called the attention of guards and visitors, the following ones had to be quick and resulted in seven clean cuts on the painting area that represents the goddess’s naked back. She didn’t struggle as the museum guard and the police officer stopped her and took her to the police station. Following this incident, the Women’s Social and Political Union – WSPU, the militant association for women’s suffrage of which she was a member, made public a short text in which Richardson compares the destruction of the painting to the incarceration of Emmaline Pankhurst: ‘Justice is an element of beauty as much as colour and outline on canvas.'”